Boshi Munchakoopas (known as Washi (ワッシー) in Japan) is a fictional character in the Super Mario series that only appeared in Super Mario RPG.

Boshi is a Blue Yoshi with an attitude problem. He allies himself with Wario, Waluigi, Wapwach and Wadaisy. In the FanonLand realm, Boshi was banished from The Mushroom Kingdom as punishment for his rudeness.

Although he is obnoxious and rude, the only way you can get Boshi to behave extremely well is through cookies, Boshi's favourite food. 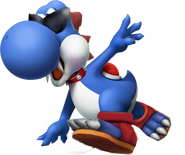