Luigi Mario (or just Luigi) is Mario's twin brother. He is younger than Mario by a few minutes as stated on Mario and Sonic at the London 2012 Olympic Games. He is also taller than his twin brother.

In Super Smash Bros. Brawl, Luigi's Final Smash Attack is called Negative Zone, where he releases a Dark Aura containing negative energy from always living in Mario's shadow all of his life.

Luigi has only been a damsel in distress twice. First in Super Princess Peach, then later in Super Mario 3D Land.

Luigi has also had to rescue his brother Mario, thrice. First in Mario is Missing, and the latter two in the Luigi's Mansion series.

For the promotion of the New Nintendo 3DS, Lugi wore casual clothing, instead of his usual clothing.

However, through his casual clothing, Nintendo have accidentally admitted that both Luigi, and his brother, do not wear socks.

In a majority of games where he is playable, what he lacks in trajectory, he makes up for in high jumps, which are seen as if he's running through thin air.

Just like Mario, Luigi is the son of Pauline and the late Jumpman.

Luigi is one of the original four members of the Mario Gang alongside Mario, Toad and Peach.

An old 1980s comic in Japan that was released online on Friday 13th April 2018 had accidentally revealed that both Mario and Luigi do not wear underpants.

Dr. Luigi is the Doctor version of Luigi. He originally wore Luigi's cap before wearing a doctor's hat like his twin brother Dr. Mario.

Luigi is currently voiced by Charles Martinet. He was previously voiced by the late Tony Rosato. His first ever voice actor was the late Danny Wells.

Luigi is generally received in a positive light by critics.

Luigi in his casual clothes 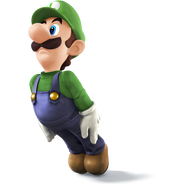 Luigi in his Tennis Form 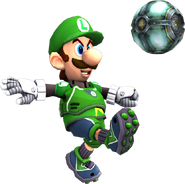 Luigi in his Swimwear