Mario Mario (often shortened to Mario) is a Plumber and a Hero, who is always saving Princess Peach from the evil King Bowser.

He is Luigi's twin brother, though Mario is the older of the two by a few minutes, as stated on Mario and Sonic at the London 2012 Olympic Games. He is also smaller and slightly more broader than Luigi.

It should also be noted that his now deceased father (Jumpman) is technically a former antagonist as he once kidnapped Donkey Kong I (now known as Cranky Kong) in revenge, for what he done to Pauline.

For the promotion of the New Nintendo 3DS, Mario wore casual clothing, instead of his usual clothing.

However, through his casual clothing, Nintendo have accidentally admitted that both Mario, and his brother, do not wear socks.

In Super Mario Odyssey, he successfully saves Peach from a forced marriage with Bowser. However, his friendship with Peach has been badly fractured by these events.

It was during the events of Super Mario Odyssey that he was given swimming trunks, allowing for Mario to go barefoot if necessary. He will also go barefoot if he cosplays as Diddy Kong.

Mario is one of the original four members of the Mario Gang alongside Luigi, Toad and Peach.

An old 1980s comic in Japan that was released online on Friday 13th April 2018 had accidentally revealed that both Mario and Luigi do not wear underpants.

In Super Mario Odyssey, Mario can change out of his plumber costume into that of Dr. Mario. Here, he wears white trousers.

Mario is currently voiced by Charles Martinet, but was previously voiced by Walkner Boone. His first ever voice actor was the late Lou Albano

Mario is generally received in a positive light by critics. 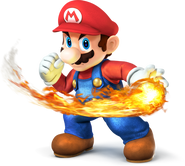 Mario in his casual clothes 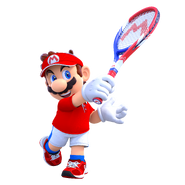 Mario in his Tennis gear 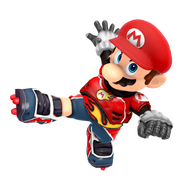 Mario in his Soccer gear

Mario in his Swimwear