Daisy has (prior to Super Mario Run) only been a damsel in distress the once, thanks to Wario, that was on Super Mario Land.

She made a return to the Mario series in Mario Tennis, and Mario Party 3, respectively.

Daisy is the only character that has not appeared in a Super Mario game, though fans still wish to see her in one.

Daisy has three variations of her Sports outfit. The first was seen on her return, in Mario Tennis (albeit with no crown). The second was in Mario Sports Mix, and her most recent one (and the most popular one of the three) in Mario Tennis: Open, which she also wore in Mario Golf: World Tour.

Daisy's crown changed from Pink to Gold when both she and Peach were revamped for the GameCube. Her hair was also shortened.

Since her return to the series, she has been portrayed as Peach's best friend.

However, for a Princess, she is also a bit of a tomboy, and this is clearly seen in her behaviour; though she is willing to make it up to her friends if she makes a mistake.

In Super Mario Run, Princess Daisy was kidnapped alongside Peach for the first time. This marks her debut in the main Super Mario series.

Dr. Daisy is the Doctor form of Princess Daisy.

She was previously voiced by Jen Taylor and Jessica Chizum.

Her first ever voice actress was the late Kate Fleming.

Although Princess Daisy is generally received in a positive light by critics, she has in the past been heavily criticized for her bratty behaviour. Critics have also criticized her for only being in the Mario spin off games.

Princess Daisy in her main dress

Princess Daisy in her original dress 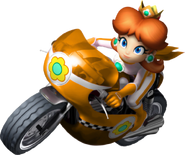 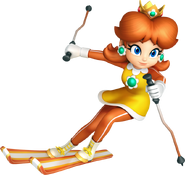