In nearly all of the games she's been in, she is kidnapped by Bowser. The exceptions to this are Super Mario Bros. 2 (later Super Mario Advance), Super Princess Peach, and Super Mario 3D World.

In all of the sports games, she uses her skills as a chance to release all of her anger at being kidnapped by Bowser.

Peach is the only Princess to have four versions of her Sports outfit, respectively seen in Mario Golf, Mario Tennis, Mario Golf: Toadstool Tour, and Mario Sports Mix.

Peach is one of the original four members of the Mario Gang alongside Luigi, Toad and Mario.

Although she is generally received in a positive light by critics, Princess Peach has received criticism for not tightening up security at the Mushroom Kingdom. She was also criticized for nearly always getting kidnapped by Bowser.

Princess Peach in her main dress

Princess Peach in her original dress 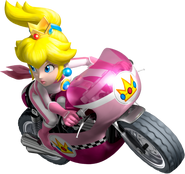