No matter what game she is in, Rosalina will always have her Luma with her. This is clearly evident in the Super Smash Bros. series, and the Mario Kart series.

Rosalina did not receive a Sports outfit of her own until Mario Tennis: Ultra Smash. It was thanks to this game that all three Mario Princesses had at least one Sports outfit.

Princess Rosalina recently received a Gymnasium/Swimming suit in Mario and Sonic at the Rio 2016 Olympic Games. She is only playable in the Gymnasium events.

Dr. Rosalina is the Doctor form of Princess Rosalina

She was previously voiced by Kerrie Kane and Mercedes Rose, her very first voice actress.

Upon making her debut in Super Mario Galaxy, the critics have had nothing but praise for her. She has been received more positively than Peach and Daisy combined. 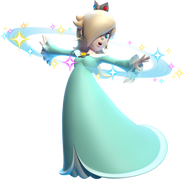 Rosalina in her main dress 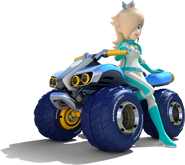