Hello to you all, my name is OliverWestern, and I am the Founder of this Wiki.

Here's is my list of current likes and dislikes.

I may like Mario, Sonic and Power Rangers, but that does not make me a bad guy.

Any vandals attempting to vandalize my page will be banned indefinitely.

As a user, I have Asperger's Syndrome (Autism), and a mild form of Multi Personality Disorder. 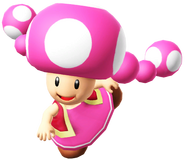 Community content is available under CC-BY-SA unless otherwise noted.

Ranked #2
on this wiki