Wario Wally Bapno is a fictional character created by Nintendo. He is the arch-rival of Nintendo Mascot Mario. He has an on-again-off-again relationship with Waluigi.

Wario was the one who sent Tatanga to kidnap Princess Daisy. He made his debut in Super Mario Land 2: Six Golden Coins, where he was the main antagonist.

Sometime afterwards, he got his own series, the Wario Series, which is a direct spin-off from the Mario series. In the Wario series, Wario's arch-rival is Captain Syrup, a female antagonist.

As a Wario Series character, he makes regular guest appearances in the Mario series wearing plumbers clothing. At first it was a yellow jumper, but it later became a yellow t-shirt. He has a completely different attire for the Wario series altogether.

He doesn't consider himself part of the Mario Team unless he's in the Mario and Sonic Olympics series.

From all the games he has been in, he is officially an Anti-Hero due to his bad chemistry with the three Mario Princesses.

Wario is currently voiced by Charles Martinet, whom also voices Mario, Luigi and Waluigi. However, in Mario Party 1, Mario Party 2 and Mario Kart Super Circuit (and the Japanese version of Mario Kart 64), he was voiced by Thomas Spindler. 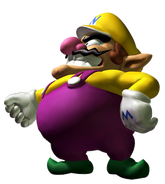